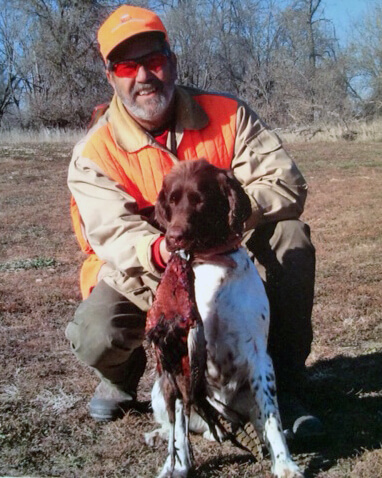 The world of rescue lost a great friend when Paul (aka Gomer) Reichlin died unexpectedly on March 22 at the age of 67. He was the founder of Contour Tool.  He retired in 2009 when his daughter Michelle took
over as the acting CEO. Michelle Reichlin of Avon, OH is an ESRA member/adopter/volunteer , who also demonstrates her devotion to the mission of rescuing dogs through her own all-breed rescue, FIDO’s Companion Rescue, Inc., founded in 2003. Her dad, Paul, was always willing to lend a hand. He pulled dogs weekly for Michelle’s rescue organization from the Lorain County Dog Kennel and took them to West Park Animal Hospital so they could get all their needed vet care.When Michelle adopted her first ESRA Springer from Judy Manley in 2003, her dad soon became an active member of ESRA’s volunteer force. Over the years, he traveled hundreds of miles evaluating Springers and transporting them from shelters and delivering them to foster homes. He fostered many himself, adopting several of them. His last rescue for ESRA was an eight-year-old Springer named Flicker who had lived outdoors all his life and was heartworm positive. He went on a trip to get Flicker and decided to pay for all his care through FIDO because, as Michelle puts it, “my dad adored him.”

An avid outdoorsman, Paul enjoyed hunting, fishing, golfing, shooting, and his dogs. He is pictured here with the last Springer in a long line of Springers that the family owned since Michelle was a baby. He was known at his hunt club as the “Dog Whisperer” and would run a half dozen dogs at a time in the field then take them to swim.

In memory of Paul’s passion for helping to rescue dogs of all breeds, many who knew of his dedication donated funds to Michelle’s rescue organization FIDO. In honor of her dad’s unwavering devotion to Springers, Michelle is sharing a portion of those donations with ESRA. We will be proud to continue our work in her father’s honor.